Widening the search for growth

Boosting the reputation of PE

On Thursday of last week, I chaired a panel of leading figures from the PE industry – including Paul Canning (HIG Capital Europe), David Whileman (3i), Franceso di Valmarana (Pantheon) and my colleague Mo Merali (Grant Thornton UK) – to launch our 2012 Global Private Equity report: ‘The search for growth’.

The report informs us that fundraising is at the top of GPs’ agendas and is causing concern as the gap between the successful funds and under performing funds widens : 72% described the fundraising outlook as negative, compared to just 46% when asked 12 months previously. Perhaps more worryingly, the largest jump in negative sentiment came from some of the fastest growing economies in the world: 78% of GPs in the BRICS economies cited a negative fundraising outlook, compared with 39% in 2011. 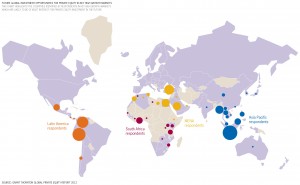 Another interesting theme that emerged from the report was that the industry is broadening its horizons in the search for growth. Anaemic growth rates in developed markets mean the PE industry is looking further afield for expansion opportunities and the panel talked up the benefits of investing in economies such as Brazil and China.

As part of the research,  PEs  in the more established emerging markets (such as the BRICS) were asked where they saw the future growth opportunities in their own regions. They came back with some fascinating responses, including Myanmar, Peru, Tanzania, Indonesia and Turkey.

However, the panel became most animated when talking about the image of PE, which has been brought into focus by the (ultimately unsuccessful) US Presidential campaign of ex-Bain Capital chief, Mitt Romney. They were in agreement that the industry needs to enhance its reputation. David Whileman admitted that the industry had “scored a few own goals” and Paul Canning said the messages coming out had been “confused.”

Franceso di Valmarana said that it is up to LPs to shout about the achievements of the industry more and tell people that they all have a stake in PE through their pension funds. Mo Merali suggested that the industry needs to take a leaf out of the world of politics and produce “ten killer facts” which better assert its value-creation credentials.

The macroeconomic environment remains tough, especially in the developed markets, and this is creating a huge divide between winners and losers. However, if GPs continue to look beyond the obvious for growth opportunities and the industry can work together to remove the blemishes on its reputation, then it can continue to create value by focusing on the fundamentals of using capital more efficiently and backing the right management teams.

is Global head of transactions at Grant Thornton.