Where’s hot and where’s not for ICT infrastructure?

How important is ICT infrastructure to business growth prospects?

Fifteen years into this century, in a world grappling with mobile and wearable tech, and a vast online economy, I’d argue the answer to that question is that it’s never been more vital than it is today.

How businesses benefit from good ICT infrastructure is a topic Grant Thornton explores in its International Business Report every quarter. You may have seen the latest findings on business optimism heading into the New Year, but the thoughts of business on enablers of and barriers to growth throw up some fascinating food for thought.

Looking ahead to the next 12 months, we asked leaders about the extent to which they felt their current ICT infrastructure – both that which they have in place as businesses and the wider environment their business operates in – is a constraint on their growth prospects (see chart). 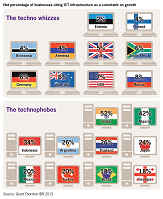 Some of the names at the bottom of the list, where the fewest businesses cite ICT as a concern, may surprise you. Right at the bottom is Estonia, where just 2% of business leaders feel it acts as a constraint. Finland and Botswana make up the bottom three, followed by Armenia. A swathe of major Western economies then follows in the top ten, in the shape of the UK, Germany, Australia and the USA.

Estonia’s position in our research might surprise a few people but in fact, it is an economy blazing a trail when it comes to getting the most out of technology. For example, Wi-Fi is free across the country. Estonia also boasts one of the world’s most advanced ID card systems. Each citizen carries a chip in a card which acts as their secure login to a wide range of government services online, from voting to picking up prescriptions.

This is a country which has embraced the internet revolution and firmly embedded technology and communications into its post-Soviet, 21st Century identity. Countries around the world can no doubt learn much from the Estonian way. Not least how businesses and the wider economy can utilise technology to improve efficiency, increase flexibility and ultimately drive down costs.

However, scale is undoubtedly a critical factor. Rolling out cutting edge ICT infrastructure in a country of Estonia’s size is a different proposition to the country at the other end of our list. Business leaders in India are the most concerned about their ICT infrastructure, with over half – 52% - citing it as a constraint on their ability to grow. Second highest is Nigeria, followed by Indonesia, Argentina, Thailand and then, perhaps surprisingly for a country with such rich technological heritage, Japan.

India’s position is significant. One of the world’s great emerging economies, expected to overtake China as the most highly populated nation on earth with the next decade, it continues to grow – but the rate has slowed. Five years ago India’s growth rate was over 10% but that has almost halved since then, and chronic underinvestment in critical infrastructure, such as ICT, is cited as one of the factors behind the growth slowdown.

Indian businesses will hope that change is on the way. New Prime Minister Narendra Modi has put infrastructure investment front and centre of his economic development plans, including fibre optic networks branching out into rural as well as urban areas.

Clearly, though, this will take time. Affecting change on this scale, with a country the size of India, is a genuine 'turn-round-the-juggernaut-task'. A phrase you often hear with India is “untapped potential”, and I think the drive to improve IT and communications across the country is a case in point. So could we see India’s position in our table change in 12 or 24 months’ time? The local business community will hope so – but they may need to be patient.

Rob McGillen is global head of technology at Grant Thornton