How dynamic is your economy?

The global economy is going through a very difficult phase. Growth in key emerging markets such as China, Brazil and India is slowing. In the United States, the economy seems to be treading water as everyone waits for the presidential elections in November, despite the looming ‘fiscal cliff’. And the eurozone remains in crisis despite signs that the European Central Bank is prepared to do ‘whatever it takes’ to save the single currency. Recent forecasts expect global trade to slow to 3.7% in 2012, compared with 6% in 2011. [1]

Against this bleak economic outlook, the key question for business leaders, is ‘where do I look for growth?’

‘Do not rule out developed economies’ is one of the key messages from the Grant Thornton Global Dynamism Index (GDI), which we released today. The index suggests that despite short term concerns, developed economies still offer the strongest overall environments for dynamic organisations to flourish. [2] Singapore tops the ranking, followed by Finland, Sweden, Israel and Austria. The highest ranked emerging market is Chile in 13th. 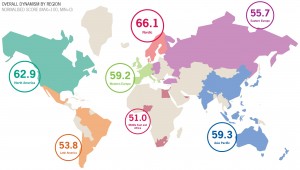 At first glance, the results seem counterintuitive: surely the BRIC economies are the most dynamic in the world? Why is China ranked 20and Brazil 30?

The GDI is far more than a measure of economic growth. Other key aspects of what makes an economy a good place for business growth – the labour force, financing environment, science and technology, regulations, the rule of law – all contribute to the rankings. Therefore whilst faster growing emerging markets may offer more attractive labour productivity and consumer demand growth rates, many developed economies remain relatively less risky investments due to open, trade-oriented policies and well-established legal systems.

It is unlikely that the global economy will recover before the end of the year and reason says it is a risky time for business investment. However, we hope growth will pick up in 2013 following the US elections and a resolution to the eurozone crisis, and instinct may be leading to dynamic organisations to look abroad for expansion opportunities. If they consulted the GDI, it would tell them not to discount the long-term growth potential of many developed economies.

[2] “Dynamism” is defined as changes to the economy which have enabled recovery from the 2008-09 economic recession and are likely to lead to a fast rate of future growth.