These are the results of the Grant Thornton Global Dynamism Index (GDI) 2013, an annual research project designed by the Economist Intelligence Unit, which ranks the development of the business growth environments of 60 of the world's largest economies over the past 12 months. The index draws together 22 indicators, including GDP growth, R&D spend, regulatory risk, access to finance and labour productivity, across five areas of dynamism to produce the rankings.

Australia tops the rankings, climbing from seventh in 2012. Chile is the top ranked emerging economy in second place, just ahead of China, which rose 17 places from last year.

Ten additional economies were added to the index this year. Of these, Hong Kong (16), Thailand (19) and Peru (24=) all ranked well in the top half of the index, but none broke into the top ten. The biggest overall riser was the Philippines which climbed 25 places to rank 21st overall.

Discuss: the 2013 global press release focuses on the split in the BRICs with China leaving Brazil, India and Russia behind.

Understand: we asked senior leaders from around the business to explain the results in their economies 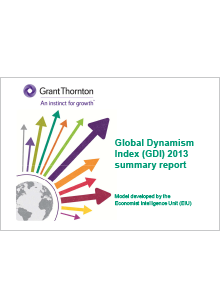