How your business can implement blockchain 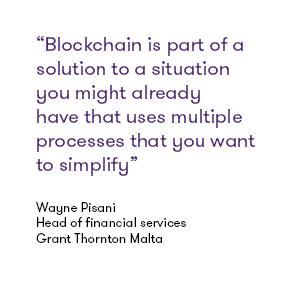 "Blockchain is not the solution to everything," warns Wayne Pisani, head of financial services at Grant Thornton Malta. "Rather, it is typically part of a solution to a situation you might already have and are using multiple processes which you want to simplify."

To this end, a better understanding of the technology will do wonders for your appreciation of whether blockchain is likely to serve your purpose.

"It is very important that people taking part in a blockchain project understand the technology or at least the implications," adds Luis Pastor, partner at Grant Thornton Spain. "People come with their own ideas on how blockchain could apply to their organisations, such as a new business model or replacing a back-office system, but they need to understand the cost of one solution or another, the security and economic impact.

"It is a cultural change."

The best approach, he says, is to start little by little, get a few other key people at your organisation trained and develop a minimum viable product (MVP). As you do this, you would be encouraged to take part in a consortium of interested parties or to invite a business services partner to help you get other stakeholders involved.

The risk when you first talk to colleagues and potential business partners about blockchain is that they get fixated on bitcoin. Cryptocurrencies represent just one application for blockchain technology. Organisations outside the financial services industry can implement blockchain in a very different and highly optimised way that centres around their business data instead.

Another early misunderstanding is to imagine blockchain technology is a new type of database that will replace your organisation's existing data storage and retrieval systems. Not so, advises Pastor: "We need to bear in mind that blockchain has not been designed for storing information. It has very bad data rates.

"It's good for certifying that something has happened through its encryption functionality but companies have to understand that blockchain is part of a much bigger platform. You should keep the information system you have already and use blockchain with it to verify and govern digital identity.

"Blockchain is not a final solution. It's just some open source code that needs other software pieces, just like other solutions around the world."

This means you would have to create interfaces between your current system and the blockchain you're adopting. And this in turn has security implications: while the ownership of data on the ledger may be cryptographically hashed and protected by mutual incentive across the network, any external systems outside the blockchain remain at risk of hacking.

So if you wanted to use blockchain technology to verify digital identities, there may be issues regarding how public and private keys are handled by participants on a public blockchain, as it is with bitcoin. Think of your public key as an ATM card and your private key as the PIN number. If someone else discovers the latter, your assets will be gone forever. Nor are you being 'hacked' in this instance: it's just mundane theft.

Another surprise to those new to blockchain technology is that participants in a network must contribute computing power to it as the chain grows. The nature of blockchain is distributed, meaning that everyone with an interest keeps an up-to-date copy of it, and all the participant nodes have to constantly validate the entirety of the blockchain as it grows.

Of course, once the initial implementation of blockchain is done, subsequent costs fall dramatically, as its distributed nature gives it fail-safe resilience right within the architecture.

A force of change

Based in Malta, Pisani can see both optimism and reticence in equal measure in this respect. "The country and the politicians are quite keen to embrace the technology and position the country as the blockchain capital of Europe," he says. "However, this is balanced by a pragmatic approach to making it happen responsibly".

"We're seeing some movement. While the financial regulator is still sceptical of cryptocurrency they are quite open-minded on the technology aspect of blockchain applied to non-cryptocurrency scenarios.

Markus Veith, partner at Grant Thornton US agrees: "There are always people with great ideas but then regulations have to follow. Sometimes the things you can do and the things you are allowed to do by law are different.

"Things have to develop from a regulatory perspective before you can fully use all aspects of the blockchain technology."

"There is much discussion around the pros and cons of distributed networks," notes Rupert Colchester, head of IBM's blockchain business in the UK and Ireland, "but this depends upon the use case. Often companies are working with their competitors within a network: this is an industry shift where they come together to drive benefit for everyone."

"Take for example a simple ATM solution," says Pisani. "If an ATM is operated by one bank and you have a card from another bank, theoretically you can't use it." But of course our ATM cards work at virtually all banks, thanks to a consortium agreement. The culture change brought by blockchain technology would be in the validated trust element. "If the consortium between those regulated entities is combined with a blockchain trust situation, they can simply work without the need to have all the typical agreements and regulatory approvals."

Getting stakeholders on board is key to making a success of your blockchain project, and it may not be as tricky as it first seems.

"People find it relatively straightforward to get buy-in," Colchester says, "but it's genuinely a problem of how quickly they can get hold of people from different businesses and mobilise 10 or 20 of them in a room or on a phone call at the same time. Even when you're working with people across your own organisation with whom you have only a vague connection, it simply takes time.

"But look at the Digital Trade Chain, which is quite unique in enterprise announcements around technology in the past ten years. It's a genuine consortium of banks that traditionally would compete with each other which are coming together to progress trade finance for small to medium enterprises for the good of the economy across several European countries.

"Pre-blockchain, that simply would not have been possible."

Colchester's advice is not to wait around for everyone to buy in to your platform before developing that MVP. If you have five or six partners, go with that and use the blockchain solution you build to attract ten more further down the line.

"Start with a small, manageable project with a defined outcome and experiment around that, then reiterate quickly."

To help make this happen, a growing variety of startup options has come into view over the last couple of years. "The code behind blockchain is open source, you can replicate it and improve it as you want. People can create their own solutions" says Pastor.

Inevitably, all these issues taken together – devising a valid use case, understanding the technology, facing resistance, obtaining buy-in from stakeholders, complying with regulatory bodies and yet another round of staff retraining – can make any blockchain project seem an expensive and complex undertaking.

Using blockchain for your business

For example, Pisani describes a small blockchain concept of a decision approval system for the directors of a multinational corporation. Instead of having a round of emails saying "I agree", you would set up a blockchain, give keys to the five directors, set the agenda and let them vote on each item (as a smart contract) in the blockchain environment.

"Would it be overly complicated? Yes," agrees Pisani, "but once it's set up, it's just a question of setting the next agenda."

"Indeed, you can have high initial costs to participate," notes Veith, "especially from a computing power and energy consumption perspective, which could be a barrier for companies before embracing the technology.

"Over time, once the technology is adopted, you can have huge cost savings."

Find out more about blockchain
Also appears under...
Share this page